"Sometimes life brings you full circle to a place you have been before just to show you how much you have grown." - unknown

This is one of my favorite photo collages.  It shows my little boy as a Tiger Cub saluting the flag as it is lowered at the Elks Lodge 101 Flag Day Ceremony.  No one told him to salute he just did it.  Then as a Life Scout he was in charge of the flag folding and passing the old flag to the Jr. ROTC. In the blink of an eye my little boy has grown into a man, who will forever be an Eagle Scout.

I am so glad that our family took the road less traveled and became a scouting family.  My husband was Den Leader and Cub Master.  My son worked up the ranks from Tiger to Eagle Scout. My girls have both been in Girl Scouts from the start of Daisies.  My older daughter is now a Senior Girl Scout and my younger daughter is now a Cadette Girl Scout.  I started as a Den Mother in Cub Scouts and then became a Girl Scout Leader of 2 troops.  I have been a GS Leader for 10 years. 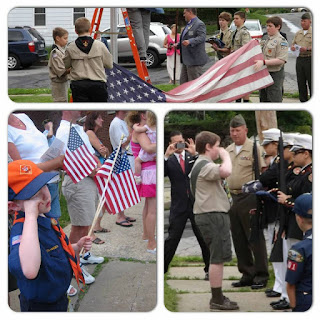 To return to the original or a similar position, situation, or circumstance where one or something started
at September 19, 2017