Showing posts from January, 2018
Show all

In Search of Words of Wisdom 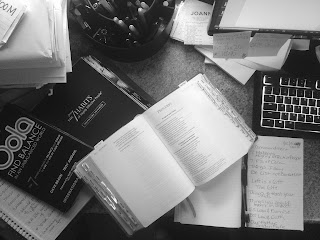 I have all of the books that inspire me with words of wisdom on the counter in the kayos.  #1 The Bible #2 My Journal Oola Find Balance In An Unbalanced World The 7 Habits of Highly Effective People Program Guide Searching for advice  Searching for answers Searching Reading  Taking Notes and Searching More
Post a Comment
Read more

January 01, 2018
Is Santa real? That is the question my youngest asked her older sister.  My older daughter said, "what do you think?"  My youngest said, "I think it's Mom."  This Christmas was hard because we weren't sure if Amy still believed in Santa or not.  Emily wanted to spill the beans and let the cat out of the bag.  I told her no, it has to happen naturally.  She said but it's all a lie and you tell us not to lie so why are you?  All valid comments.  For the past week or so I have had a huge box in my bedroom that Amy kept asking about.  I told her Santa sent it early and that I didn't know what was in it and I couldn't open it.  Honestly I had no place to keep this box it was so big.  I think when it was opened on Christmas is when she really put it all together.  So after reading what other parents did on Pinterest I decided to write the kids my own letter from Ken and I.  Here is the letter I gave them.  When Amy found it on the tree, she brought it
Post a Comment
Read more
More posts

artsyBE
Happy to BE an artsy wife and mother, sister, daughter and friend.